So it’s December and time again for the annual Advent of Code. For those not familiar, this is a set of 25 puzzles (each with 2 parts) set by Eric Wastl. They have a Christmas theme and story and are solvable with just a little programming knowledge and some puzzle-solving skills. The puzzles start quite easy and get increasingly more complicated, and part 2 can often be a lot harder.

A couple of years ago, Adam Riley suggested we try solving them in Alteryx and so a new annual tradition began. It is worth noting that the puzzles do not necessarily suit Alteryx, but trying to think about how to solve them is a great chance to sharpen your skills. We created some rules – solving using BaseA: 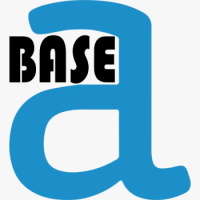 If you want to join us, we have an Alteryx leaderboard you can join by going to https://adventofcode.com/2019/leaderboard/private and using the code 453066-ca912f80. We are chatting on the Alteryx Community under the Advent of Code label. The leaderboard awards points by order in which they are solved. As the puzzles are published at midnight Eastern time, this gives those who live on the West Coast an advantage. Those of us in the UK, it’s 5 am, which is not a good time for my brain at least! Generally, this means it is fairest to look at total stars rather than points.

For this year, I thought I would write up my solutions with some alternatives solutions from other people every week (well at least while we succeed in solving them!). When building a workflow, there are a couple of other dimensions we can look at beyond just working: how fast is the workflow and ‘Tool Golf’ (i.e. how few tools can we use)! So I will try and pick different approaches to my own for each day.

So for this puzzle, you need to find the pair of numbers which totalled 2020. I chose to work out the second number for each input row (a new column Miss), I can then join this to itself (on Miss=Field1) to find the valid possibilities. I then used a filter tool to pick when Miss is greater than Field1 to get a unique solution. Finally, I computed the product with another formula tool.

For part 2, you need to do the same but with three numbers. First, I chose to make all possible pairs using an Append Fields tool (set to allow all appends). After this, the process is similar to compute the missing third number and join.

For best ‘tool golf’, I could have merged a lot of this into the formula tool (doing the comparison and only producing a Miss if fields will be in order) and then join tool would produce a unique result. 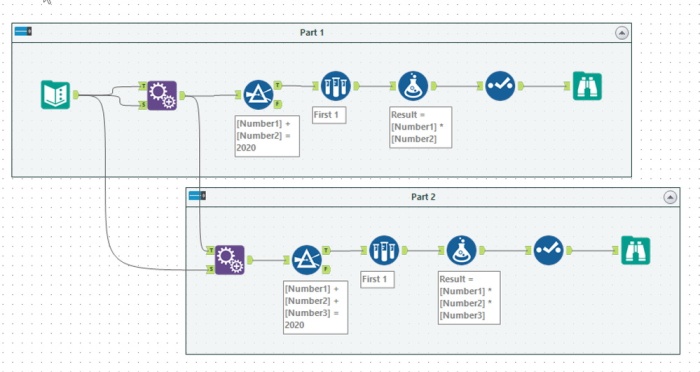 This solution belongs to @JeanBalteryx. In this case, first, he creates all possible pairs (again using Append Fields tool) and then filters to the pairs where the total is correct. Using a Sample tool, you get a single unique answer which you then compute the Result on (using the formula tool). He also tidies up the data using a Select tool and puts the results into a Browse tool (mostly I choose to rely on Browse Anywhere for Advent of Code).

For part 2, the process starts from the full set of pairs using another Append Fields tool to get the complete set of triplets. After this performing the same filtering and sampling to produce the required result. 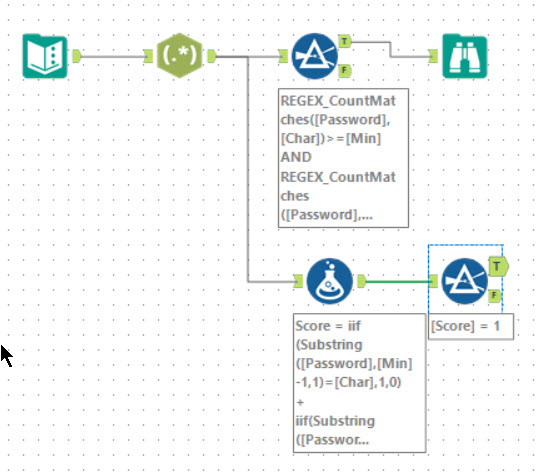 And so we enter the world of Regular Expressions. First, using a Regex tool to parse the input into columns. An expression of (\d+)-(\d+) (.): (.*) will break it out into 4 columns:

I then fed this into the filter tool using REGEX_CountMatches to count the number of times the specified character occurs: REGEX_CountMatches([Password], [Char]) and can then compare with Min and Max to determine valid matches.

For part 2, I relied on the simple Substring function to find the characters to compare. Watch out for the off by 1 error – my brain wasn’t working well at the time when I was building it and became off by 2 before realigning!

Regex For The Win 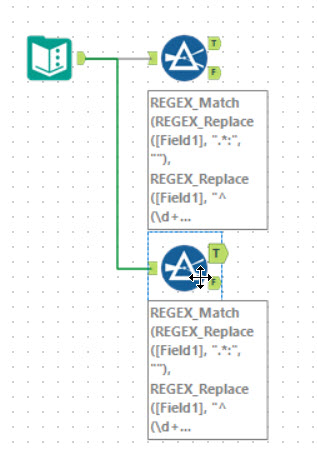 For this puzzle, I had to choose Ned Harding‘s solution. He won the ‘tool golf’ challenge with a score of 2 tools! But this is not for the faint of heart! Using REGEX_Replace, he constructs the regular expression for a REGEX_Match in the filter tool:

The first REGEX_Replace replaces up to and including the :. The second takes the 1-8 n and turns it into ^[^n]*(n[^n]*){1,8}$. This will ignore everything until the first n and then match between 1 and 8 blocks each starting with an n, and then followed by some non n characters. The ^ and $ mean it must be the whole password.

For part 2, the formula becomes:

Some very clever regular expressions in here but not simple! 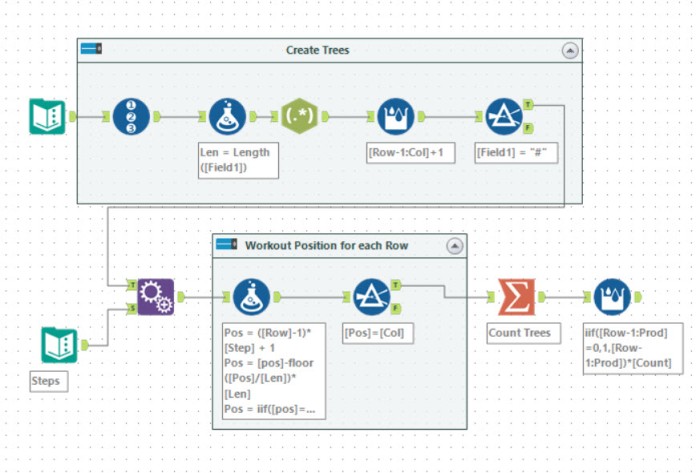 In this puzzle, we are given a map of where the trees are. I chose to turn this into a list of trees with their Row and Column co-ordinates. I used a useful trick of a Regex tool in parse more with an expression of . to break each character into a row. 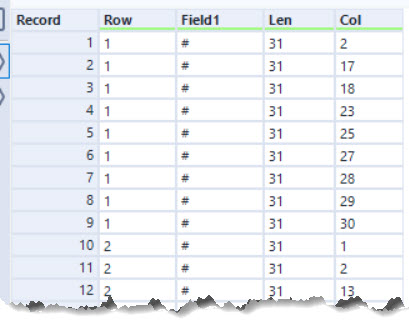 Having got this list of trees, you can then filter it to cases where the column is equal to the MOD((Row - 1) * Step + 1, Len), where Len is the length of the input string. For case 1, the step is 2. This works well for all but one of the case 2 scenarios too. In the case of 2 rows for 1 column, you need to amend the expression a little more. I chose to use to make the Pos a double and reproduce the MOD function but the following 3 steps:

Having produced this value, you can filter it for when the Pos=Col. Finally, a summarize tool and a multi-row formula allow the computation of the counts and the product.

Danilang‘s solution is a nice improvement to my approach. Instead of parsing the input into a row-based data, he used the Substring function to pick the specific character out.

Additionally, he chose to use a RowSkip so every other row is removed in the specific 2-row case. This is cleaner than switching to use a floating-point number. It would allow a cleaner expression to get the character:

A nice clean solution and with a win of 7 in Tool Golf!

So we’re back in the land of RegEx. There are a set of fields we need to parse and determine if they are valid. This is a perfect use case for REGEX_Match.

The first task of this puzzle is to read the input and identify when each record ends, and the next one begins. This is identified by a null line (worth noting I had an odd defect when copy and pasting from the input into Alteryx and the empty rows were skipped). After this, using a Regex tool in tokenise mode with an expression (...:\S+) breaks each field out into its own row. In retrospect, this would have been simpler done using a Text to Column tool with a separator of . After this, I chose to use a formula tool to split into Field and Value (again easier to do with a Text to Columns):

For part one, it’s just a case of counting the number of matching valid fields (ignoring the cid field for simplicity). For part 2, we need to move on to validating the actual value. I chose to use a Find and Replace to append a validation regex. The image below shows the expressions I used:

CGoodman3 took almost the opposite approach to me and entirely avoided using Regex. He used a Text to Columns tool to break up the input into separate rows. This section shown above solves part 1 and is quite similar to my approach. 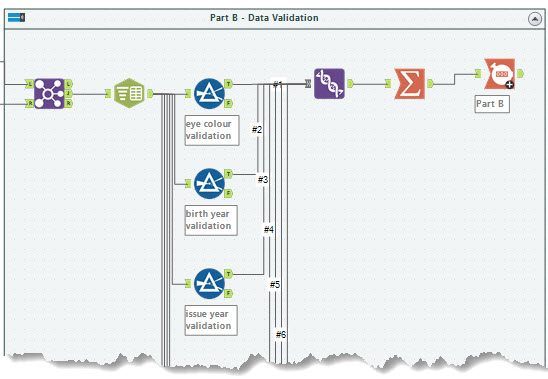 For part 2, Chris chose to implement a filter tool for each expression. A couple of examples of these are shown below:

One advantage of this approach is that each expression is simple and easy to debug. Each filter deals with one type of field, and then the valid results can be joined together using a Union tool.

Day 5’s problem is the description of the binary representation of an integer with 10 bits, with F and L being 0 and B and R being 1. Alteryx has a ‘BinToInt’ function which takes a binary string and converts to an integer. So the unique seat id is given by:

There is no need to treat Row and Column separately as the expression combining the two is the same as a 10-bit integer. To find the missing value, I computed the Next seat and joined the data to itself. The L output then returns 2 rows – the missing row and the final seat.

There is a slight improvement (as pointed out to me by Ned):

The ReplaceChar function allows for a list of target characters so you can reduce to 2 calls instead of 4.

The vast majority of submissions for this question were basically the same. There were a few variations. As a bit of a fun experiment, Ned and I came up with an alternative approach:

First, using a generate rows tool to create a Pos field going from 1 to the length of SID (the input string). Then using the expression:

This checks the character and using its position within the input string to turn into its binary place value (pow(2, length([SID])-[Pos])). After this, grouping by SID and summing these values gives the required value.

To find the missing seat and the maximum, these are then sorted, and a Multi-Row formula is used to compute the difference with the next row. The 2 cases where this is not 1 gives the required output for parts 1 and 2.

So that’s week one (well first 5 days) down. Generally, these puzzles have been well suited to Alteryx. If you want to take a deeper look at my solutions, they are posted to GitHub. A few other git repositories are listed below:

As it stands at 2 pm on 5th December, the leaderboard looks like: 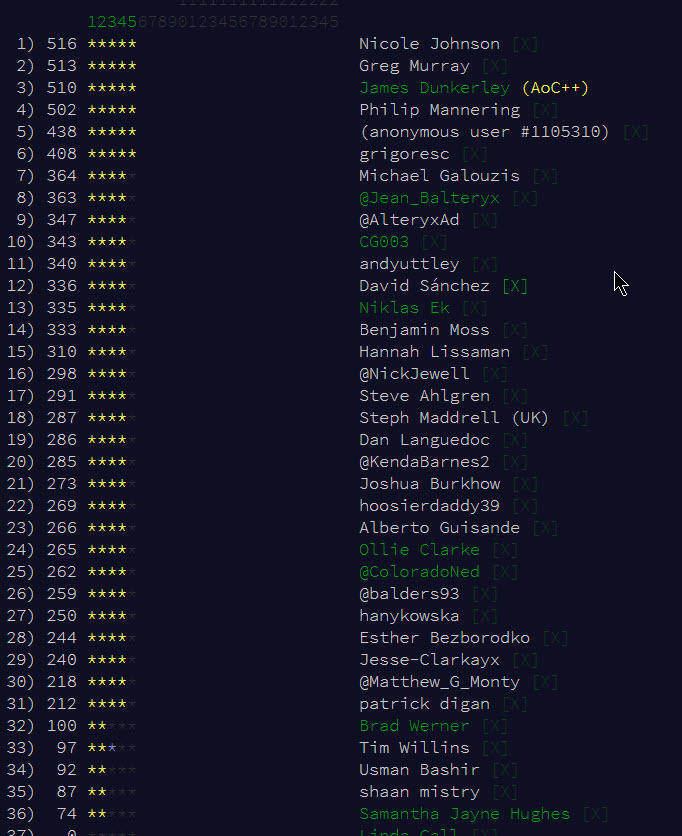 Let’s see what week 2 brings and how much further we can go!